Myopia is commonly known as short-sightedness. It means that the eye is unable to focus on distant objects, making them seem blurred. Most forms of myopia are considered a variation from normal vision, rather than a medical condition. Vision can usually be corrected with glasses or

contact lenses, or in some cases, with laser eye surgery.

The eye and myopia

Light coming into the eye is focused onto the retina – an area on the rear wall of the eyeball. Seventy per cent of light entering the eye is focused by the cornea (a clear dome which forms the outer covering of the pupil). The rest is focused by the lens, which sits behind the cornea. If the light is focused properly on the retina, we see a clear image. If the light focuses in front of the retina, the image is fuzzy. See the illustration on the right . With myopia, the cornea is too curved or the eyeball too long. This means that images are focused in front of the retina rather than directly on it.

Myopia most commonly develops in childhood or early teens (between 8 and 14). The risk of developing myopia is increased if there is a family history of it. There may also be a link between myopia and prolonged close-up work, such as reading or sitting close to the television, although there is little scientific evidence for this. Myopia can be associated with certain types of cataracts, where the lens becomes cloudy. It can also be caused by a condition called keratoconus, in which the cornea thins and becomes more curved. Temporary short-sightedness, called pseudomyopia, can be caused by a number of diseases or certain drugs. For example, myopia may be the first sign of type-2 (non-insulin-dependent) diabetes. Symptoms of pseudomyopia usually clear up if the underlying cause is treated.

To a short-sighted person, distant objects seem blurred, while near objects can be seen more clearly. Other symptoms can include headache and tired eyes . Myopia develops as the eyeball grows, so it starts in childhood and may worsen during the teens. It normally stops getting worse in adults.
Children younger than eight may not realise they have blurred vision. Parents or teachers may suspect a child has myopia if they squint or frown a lot, hold books close to their face, or have trouble seeing a blackboard, television or cinema screen. 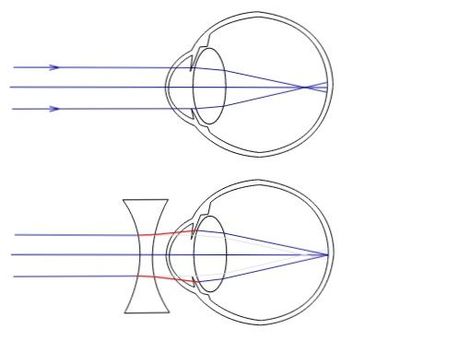